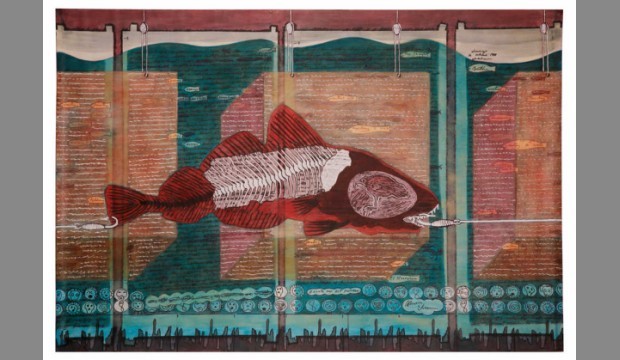 The above image is by Bertha Husband. The posting of this essay is in memory of her, as Bertha died in the year of 2017.

Her mind was lucid, precise & agile. Her humor was irreverent & hilarious. Her heart was wide & deeply kind. She loved the outrageous. & she loves Mary Jo.

What drives an artist’s work, cultural context or her autonomous decisions? Is the work germinated by a reaction to her culture’s time and its critical dialogue? Or, does she forge personal, intuitive statements into works of art that drive the development of art movements? These are almost hackney questions to which the 20th century demanded an either or response.

Often the most interesting work happens between opposing ideas, at the intersections where the tensions occur. Bertha Husband plays between these. Her work engages you in the experience of text itself as independent from its conventional readings. Simultaneously she immerses you into the lush visual act of reading the work. The viewer moves through and across layers of space for the aesthetic joy of the work itself. The former is an established post modern strategy of appropriation and of manipulation of text. The later is a celebration of the act making a visual object rooted in modernism’s formalism.

Her installation presents the object as text and investigates different ways of reading it. The viewer experiences text as painting, as scroll, as sculpture and/or as a deconstructed and reconstructed book object. Each work functions as an independent object to be read but taken together they evoke a 19th century, collector’s library. In this library, old and valued objects of knowledge are tucked away for the viewer to peruse and examine. Bertha’s large paintings are rolled up as scrolls and stored in large flat drawers reminiscent of collections of old maps that contain information about far away place. Like old maps, these paintings act as signs and passages to the imagined memory of place that is set in position by visual measurements. These are enriched with fanciful symbols evoked from the Bertha’s cartographer’s imagination.

The sculptures are old Georgia law books deconstructed and reconstructed as three-dimensional objects, A sense of justice, or the lack of it, becomes embodied in the amalgamation of balance and weight. Like a rare object in a collector’s library, they evoke the measured mystery of the known and unknown spaces.

Post Modern signs strip communication to its bare minimum. Signs are reduced to a simplistic shapes which are inherently static, and isolated. In contrast, Bertha’s signs create connections and movements that flow through her painted surfaces. These surfaces create a visually read page of layered information. Signs are reduced to minimal marks that flow through the paintings both latterly and in and out of the picture plane. Your eyes progress across the painting’s surface, double back, and continually recycle backwards from the right edge to the left. Any easily reading or literal meaning is obscured.

The visual flow of information mimics reading a text. Like the individual sign, the text’s flow is obscured if not obfuscated by the artist’s hand and mark making. Signs become symbols which become metaphysical layers of cultural meaning embedded in time by a sense of place and measured position. Through Bertha’s process, the surface of the painting becomes “the skin of culture” at the intersection of tensions, an amalgamation of fact and fancy.